Description of the home automation system made with Arduino

The system is based on the card Arduino ( www.arduino.cc ). This is a hardware board was able to detect and change its pin according to the program loaded into it. The heart of this card is the ATMEGA328 CPU and can be programmed with a good set of instructions that make a card suitable for countless purposes.
In the project several Arduino boards have been used because the first version of the project that I maked was plagued by one problem: one Arduino could not perform all required functions quickly and often, to implement new features i had to optimize the program within the limits of CPU memory ATMEGA328, contained in the Arduino board.

To give an idea, more functions are implemented in the program and more, the number of read cycles per second inputs decreased, until arrived to 5 for the second.

The version that I opted now use more CPU and each CPU performing a relatively simple task.You can see home automation system blocks belows. 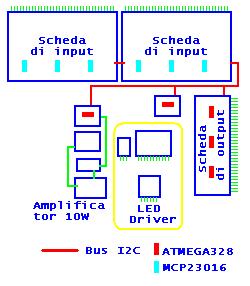 It makes the behavior of the whole system CPU fast and reliable. In the project the cpu are 5 (red rectangle). The main read (at center) the inputs from the “input card” and then communicates with the “output boards”. In practice contains the main program of the project.

The output card CPU containing the more complex software to achieve the simple features to timed the pin status.

Finally the last cpu is destined to command the waveshield card.