Reed sensors are small blades, in a small phial, which touching a magnet approaching. We use a lot, to detect the opening of doors or windows.
Normally, those windows are invisible, because ‘ incorporated into the structure, while the shutters, that you can purchased for a few cents, and appear as in the photo. 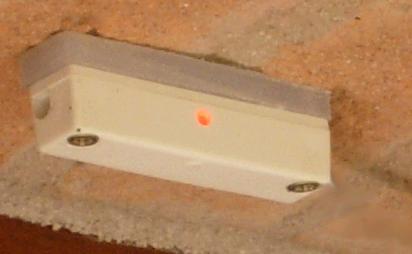 In reality, they lack the red LED high brightness, visible in the center of the sensor. This has been included, specifically, by making a small hole with the drill and securing it with a drop of silicone.
The flashing LED is a significant deterrent against thieves that they understand that the house is alarmed by the flashing of the LEDs. These flashing, differently in the presence of people; furthermore, the power of the LEDs is simultaneously on all the LEDs on all reed switches.
Coming back to the flash mode, the flash occur with this pattern repeated constantly:

Change the reed switch is easy, a drill bit to make a hole, where to insert the LED high brightness’ and then connect the sensor wires, as shown in the following diagram, in which the Reed is the inside of the gray rectangle.